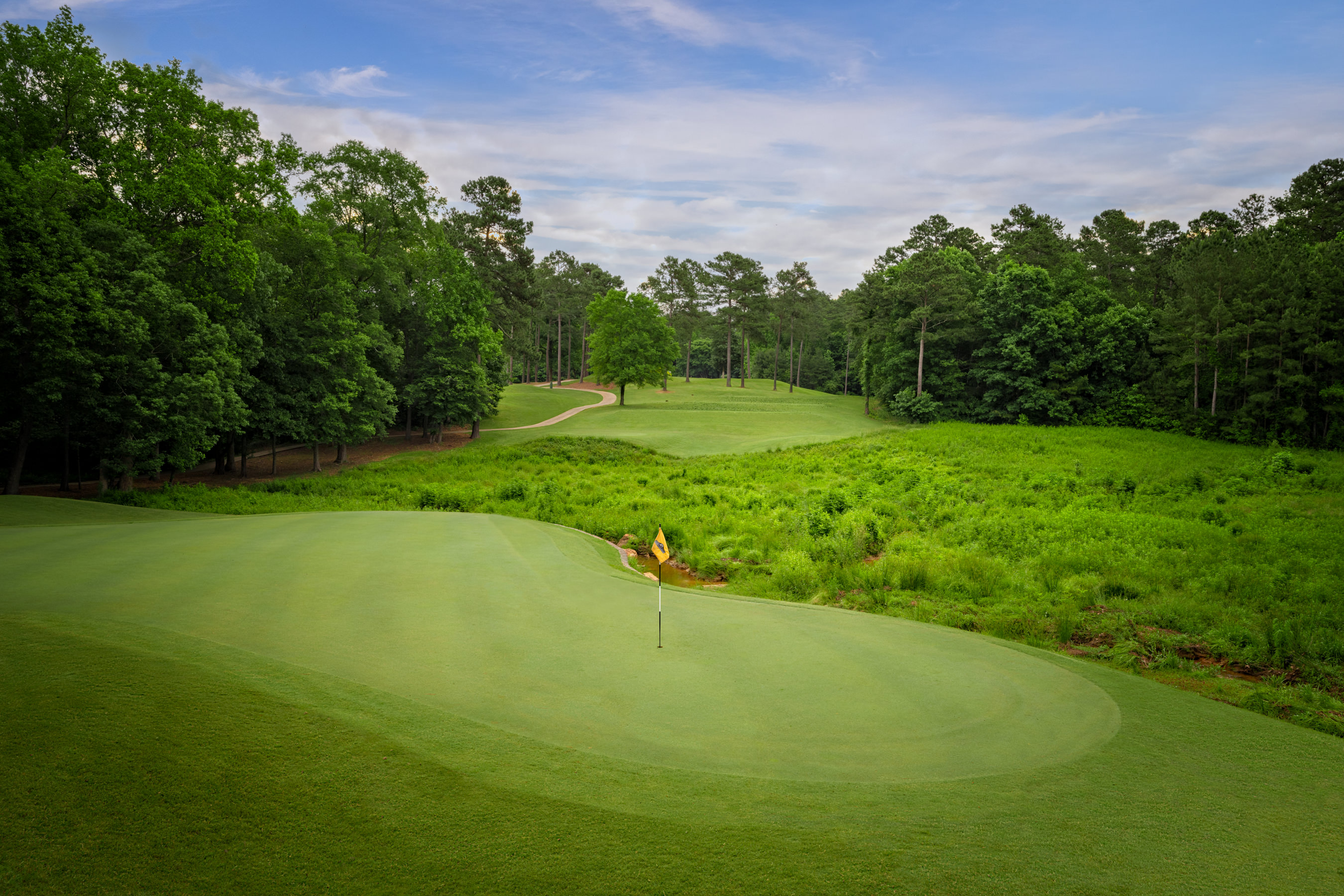 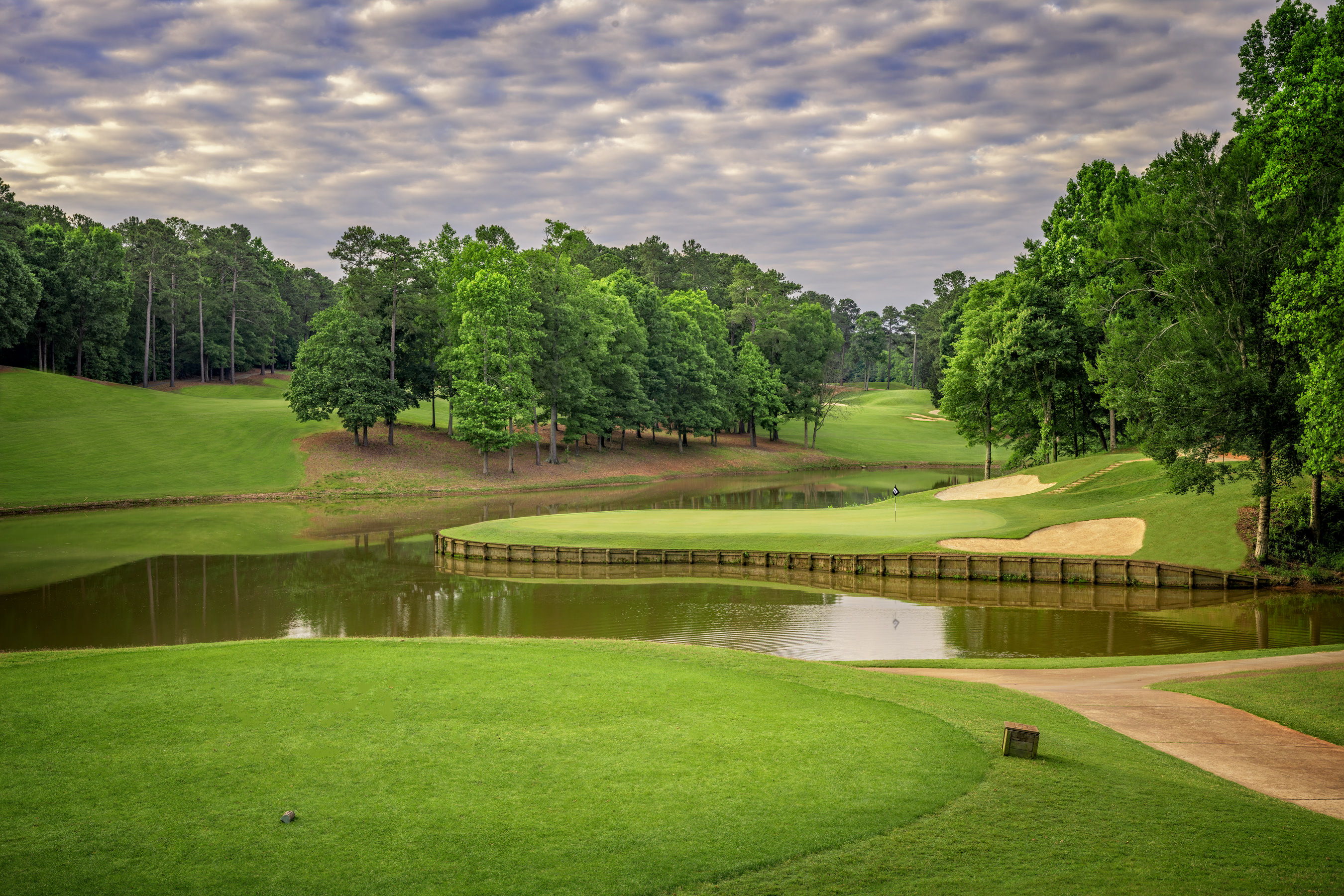 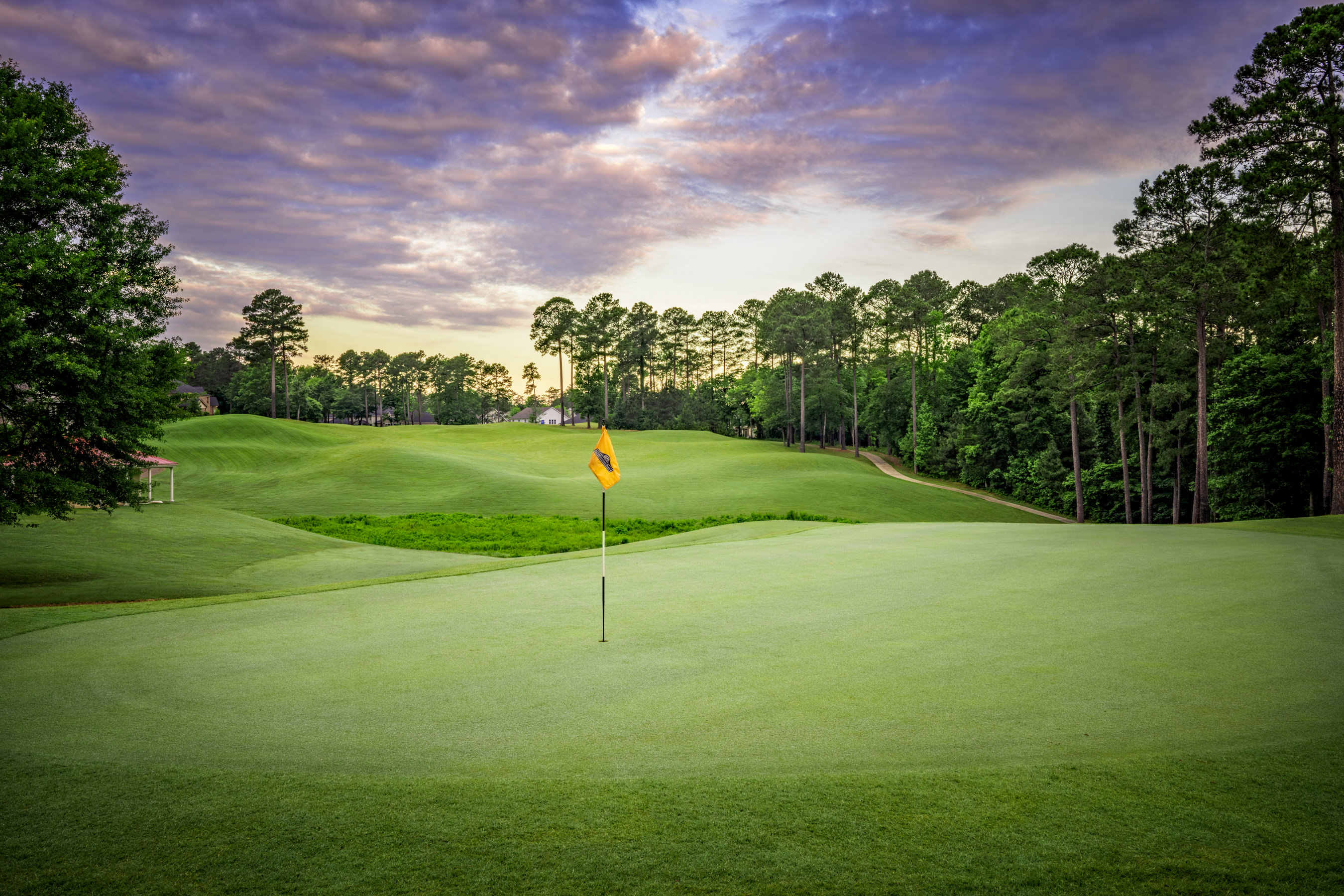 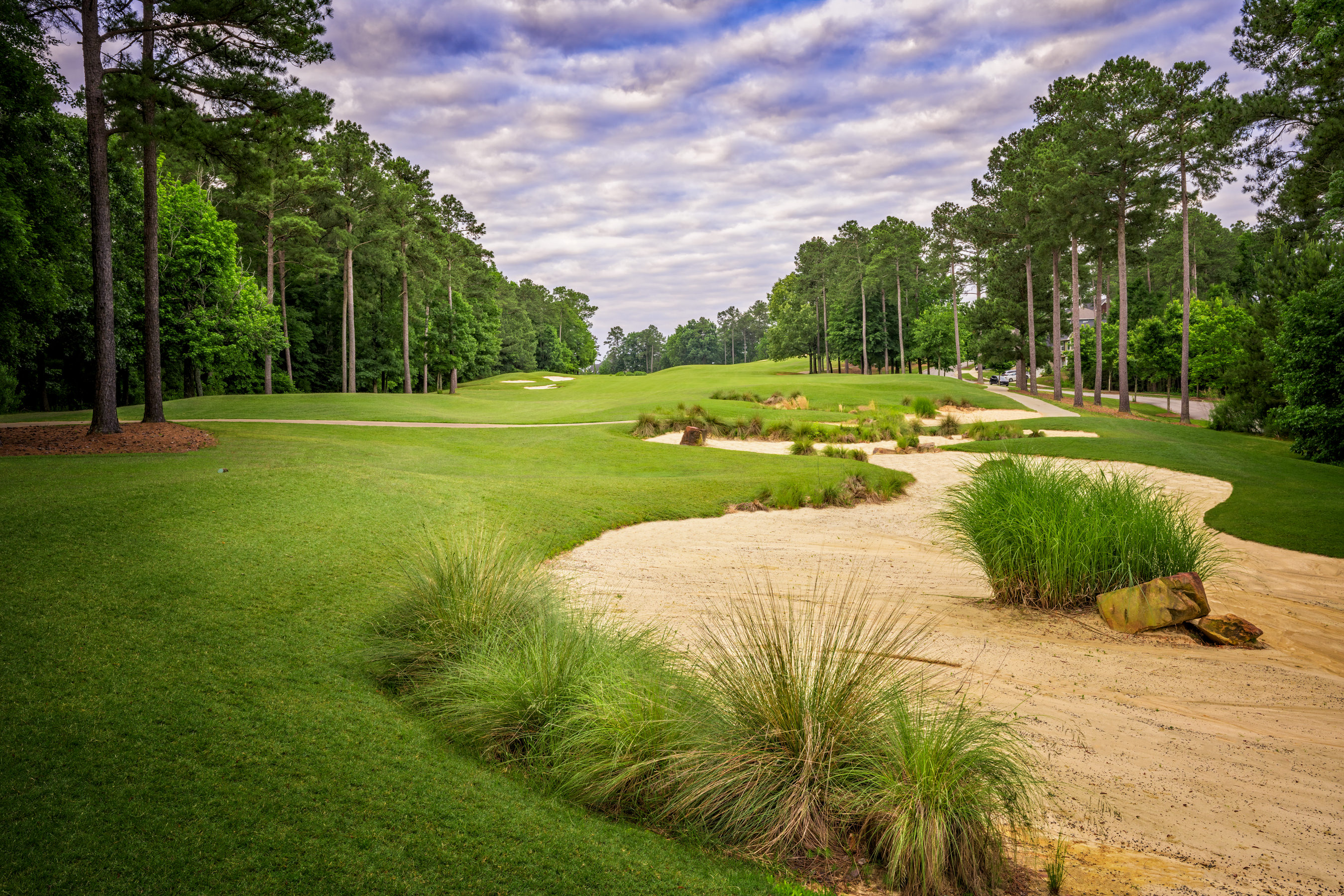 Great golf just got even better in Columbia... 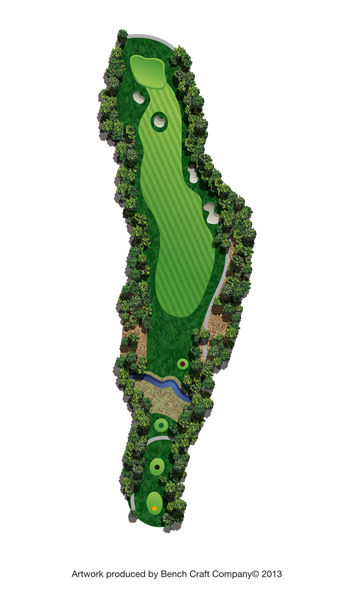 Let the tee shot favor the center to left side of the fairway to avoid the bunker on the right and best approach to the green. Second shot plays one to two clubs longer due to the severe uphill shot. Green has three tiers and is very undulating so hitting the approach onto the correct tier is a must!

Straight away par three hole with bunkers short left and long. Avoid the oak tree to the right that may come into play for golfers playing a hook. The bail-out area is safest on the right side of the green. 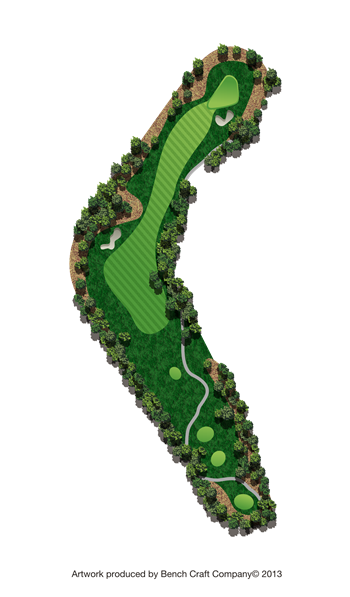 This difficult par four requires a tee shot long enough to reach the corner of the dogleg. The green is very deep from front to back and may make a difference of three clubs depending where the hole is located. Avoid the bunker on the right of the green. 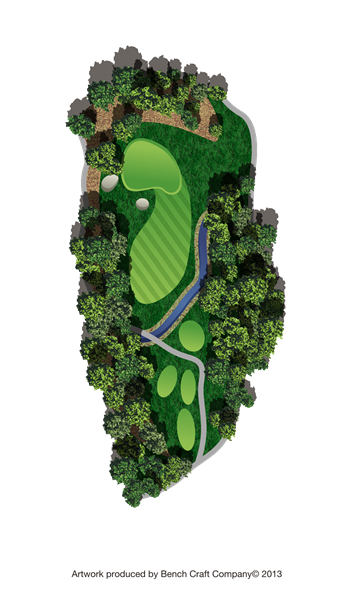 This uphill par three has a false front on the right side of the green. The severe uphill shot will require one to two extra clubs to land safely on the putting surface. The green has two tiers so it is vital to know where the hole is located. Avoid missing the green to the right as the ball may roll down into the hazard. 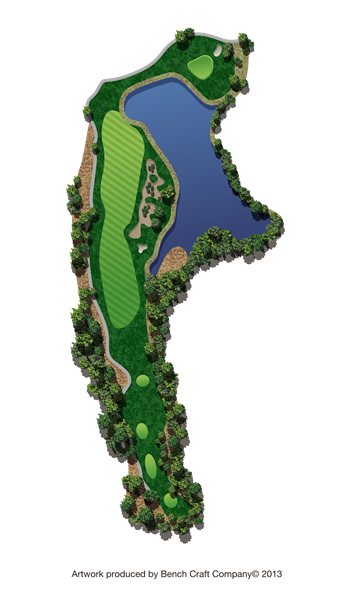 A huge waste area and water guards the right of the fairway so favor the left side off the tee. With a long and straight tee shot and a well struck second this hole is reachable for the longer hitters. For those laying up on the second shot the left side of the fairway allows the best angle of approach. The approach shot is deceivingly uphill so allow for one extra club! 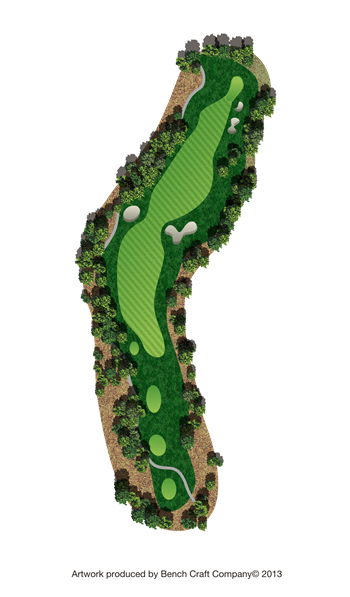 The most difficult hole on the course requires a well-placed tee shot to reach this elevated and narrow green. Avoiding the bunkers off the tee is essential if par is to be made on this hole. Add an extra club on the uphill approach shot. Any shot hit to the right of the green will end up in the bunkers short or in the lateral hazard. 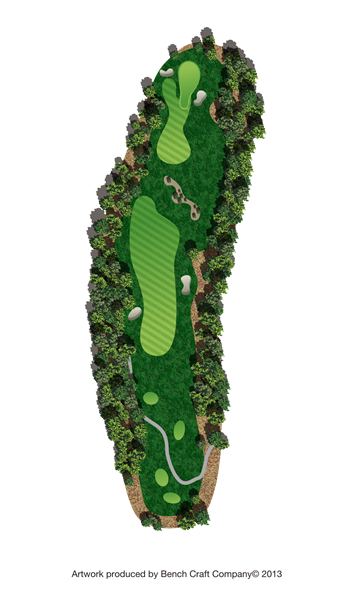 Allow the tee shot to favor the left side of the fairway as the balls tend to roll to the right. Longer hitters may want to use a fairway wood to stop short of the waste bunker that crosses the fairway. The approach shot is slightly down-hill and precision is a must with bunkers right and left of the two tiered green. 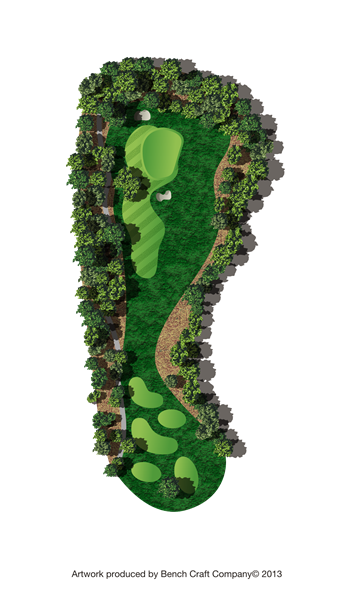 This inviting par three has a large bunker guarding the right front portion of the large green as well as a bunker left and long. A well-struck tee shot with good distance and direction will leave you with a good opportunity for birdie. The safe bail-out is to the left of the green. 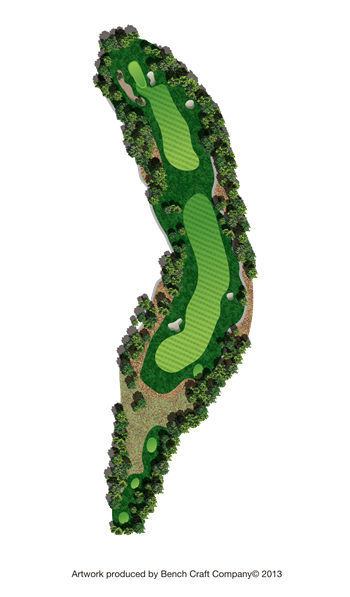 This long dogleg left par five can best be described as a roller coaster ride. Avoid getting greedy and going too far left off the tee as trouble lurks just over the fairway bunker. Rarely reachable in two makes this a true 3-shot par five. The second shot must carry a massive gullied fairway to leave a short iron approach to a well-guarded, two-tiered green with bunkers on both sides. Par is a good score here! 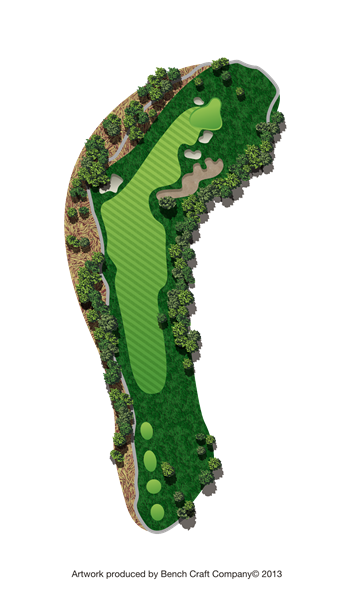 A well placed downhill tee shot will leave you with a short iron shot into this undulating and well guarded green. A shot struck to the right off the tee will end up in the lateral hazard or behind trees that block out the approach to the green. The green has three tiers and is bunkered on both left and right. Club selection on the approach shot is essential to have a chance at birdie! 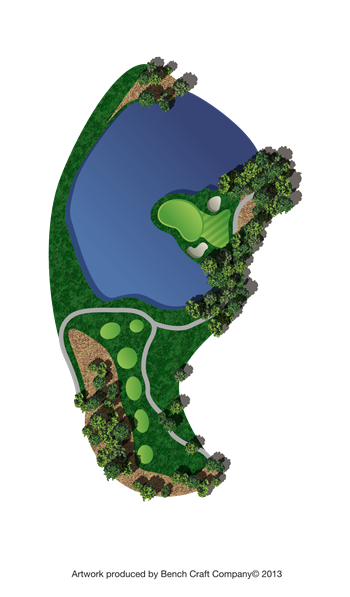 Our signature hole is a picturesque downhill par three to a green surrounded by water on three sides. A slightly downhill mid to short iron shot to a large green can leave you with a good opportunity for birdie. Any tee shot that is not well struck can spell disaster. The bail-out is on the right side where the biggest area of green is located. Just make sure you avoid the bunker and oak tree! 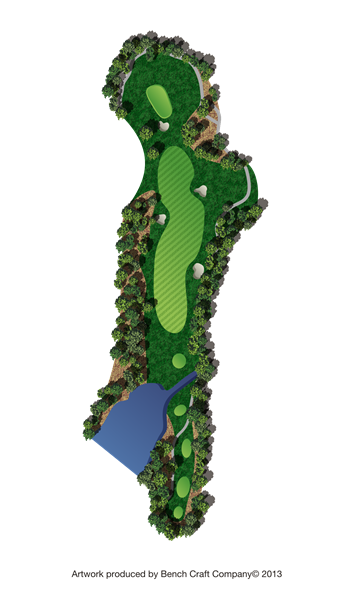 This slightly uphill par four with a slight dogleg to the left requires a solidly struck tee shot favoring the center to left side of the fairway. Tee shots hit to the right may end up in the fairway bunker or lateral hazard. Add an extra club for the uphill approach shot. The undulating green is guarded by a bunker in the front. 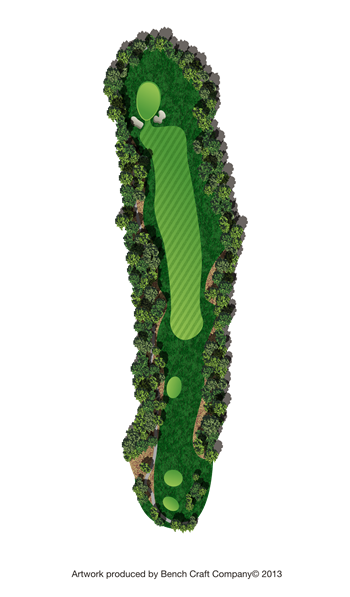 This dogleg left requires a tee shot that favors the left side of the fairway. Heavy woods and a lateral hazard run the length of the right side of this hole. A slightly elevated green requires a solid approach shot with bunkers guarding the front right and left portions of the green. Club selection for the approach shot can vary by three clubs depending on the location of the hole. 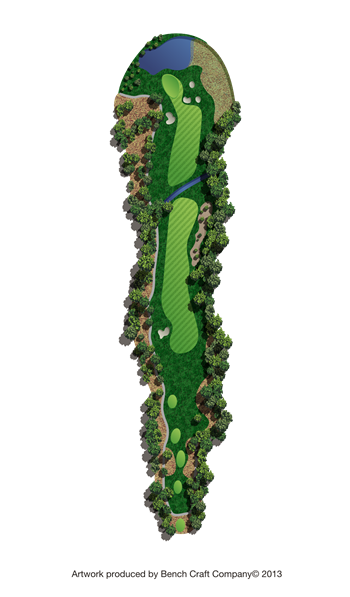 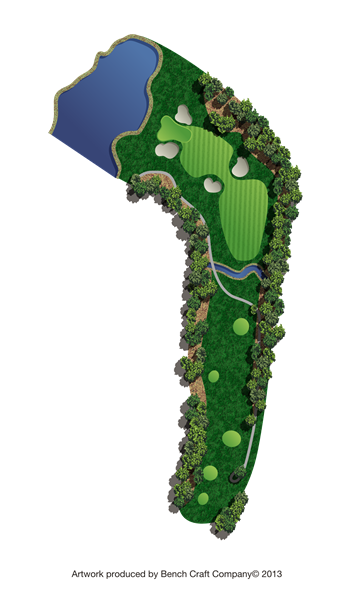 Play the tee shot to the wide part of the fairway on this short dogleg left par four hole to avoid the bunkers on the left and long. The approach shot must be precise to a three-tiered green with many undulations. The green is bunkered both left and right and any shot in the bunker will make par a very difficult score to achieve. 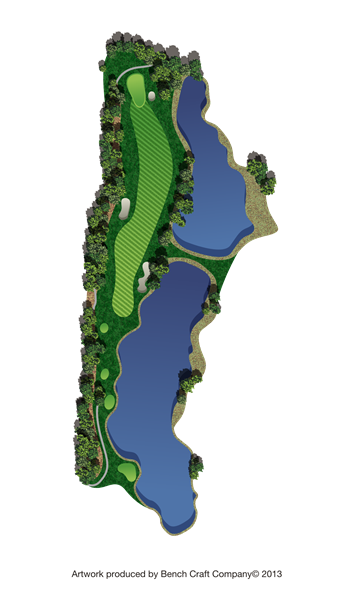 As the second most difficult hole on the course, a well struck tee shot favoring the center to right side will avoid a fairway bunker on the left. Shots hit to far right off the tee may end up in the water. The green is guarded by a bunker and hazard to the right so the bail-out area would be on the left side. From front to back there may be a difference of three clubs depending on the hole location. 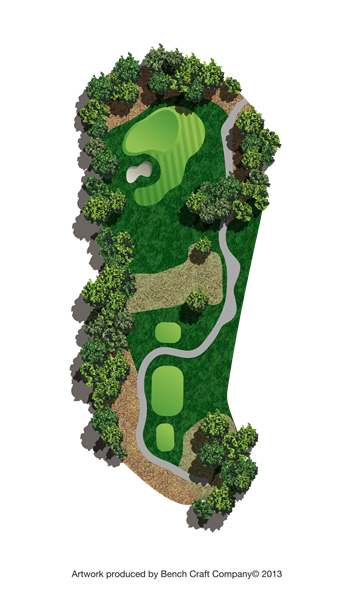 An uphill par three with lots of character the false front on the right side of the green may result is short shots rolling all the way back into the fairway. A large bunker guards the left front of the green and anything well left may be out of bounds. Take two extra clubs to safely find the center of the green. The bail-out is on the right side for easiest up & down. 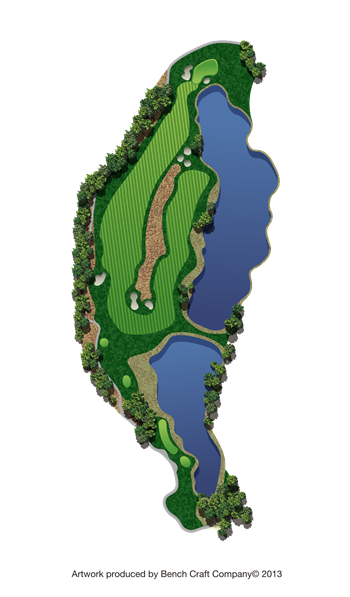 Large mounds divide the double fairway and provide the golfer options of how to play the hole. Most golfers will use the left fairway while extremely long hitters may reach the green in two from the right side. Avoid the fairway bunkers on both left and right off the tee.

The second shot should favor the left side of the fairway providing the best approach to the large two-tiered green and avoiding the water on the right. The green is bunkered left and right and all putts will break toward the water. 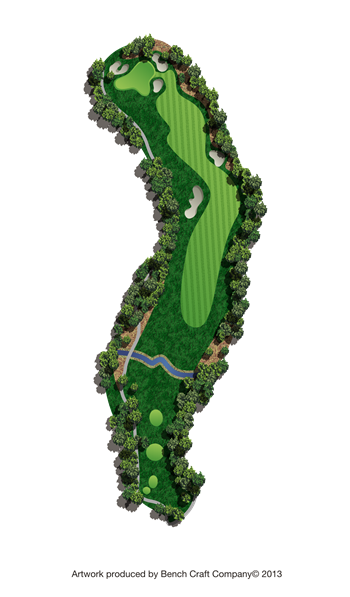 A tee shot down the center to right side opens up the second shot to the dogleg left par 4 hole. The second shot plays a full club to club & a half longer due to the severe uphill terrain.

The green is guarded by bunkers short right and long left but the safe bail-out is on the left for the easiest up & down. 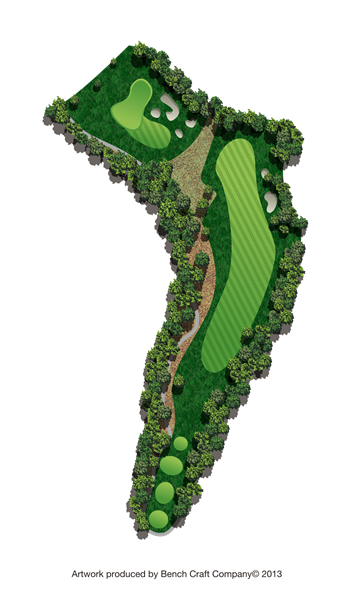 Don’t let the yardage deceive you on this short hole. A tee shot down the middle to left side will give you a short yardage to the well-guarded elevated green. For most golfers a driver is not needed as it may wind up in the fairway bunkers or in the creek left.

Add an extra club to club and a half for your approach shot and make your mistake LONG as any shot coming up short will almost make par out of reach. 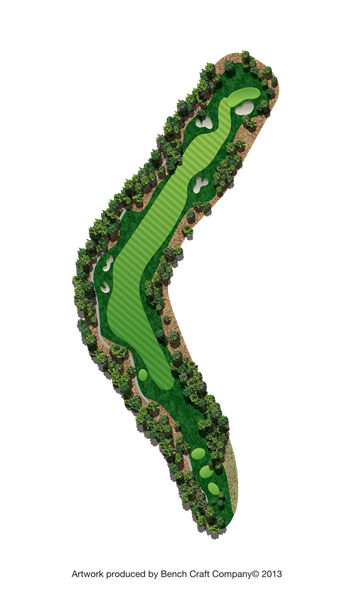 Aim your tee shot down the center to right side on this dogleg right par 5 hole. Let the second shot favor the left side, avoiding the fairway bunker 20 yards short of the narrow slanting green for the best angle of approach.

Any shot long or left will roll down a steep slope away from the green. This green is guarded by a long bunker on the right side is normally firm so allow for some roll on approach. 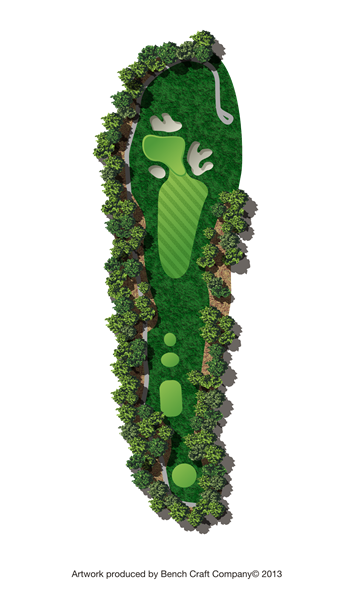 This par 3 demands an exacting tee shot with bunkers on three sides of the green. The center to right side of the green is always a smart play as it is your biggest target.

Don’t get greedy if the hole location is on the left side! Proper club selection is essential if par is to be made! 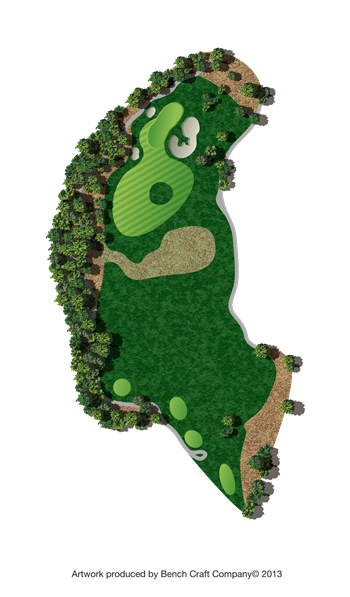 A short risk-reward par 4 hole, the tee shot in the center to left side of the fairway makes a birdie very realistic. The green is very long from front to back and slopes into the golfers approach shot.

Stay away from the deep greenside bunker on the right! Long hitters can drive the green however errant shots will pay the price! 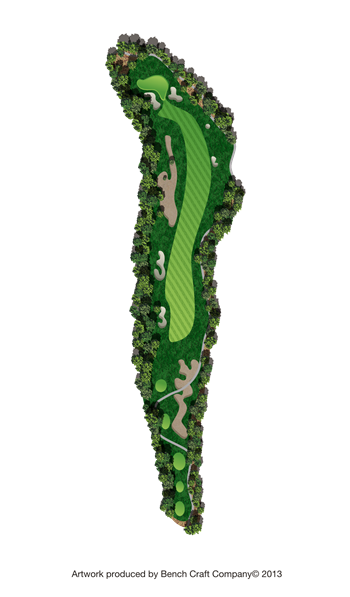 A tee shot in the center to the left side of the fairway sets up the best angle for the second shot. Play the second shot down the right side as any shot hit left will funnel down to a long waste bunker.

The approach to the green is slightly uphill so add an extra half club! This is a true 3-shot par five hole! 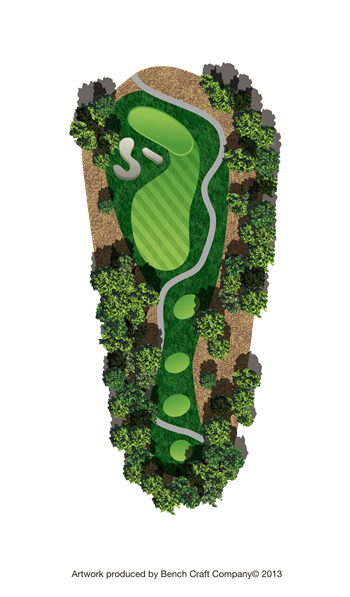 A very exacting downhill par-3 hole, club selection is critical. The green angles away from the front right to the back left so the farther left the pin position, the longer the carry to the green. In general golfers can use one club less than the yardage states.

The green slopes severely from right to left so make sure the ball lands right of the flagstick! Short and long both spell disaster but there is a small bail-out area on the right side. 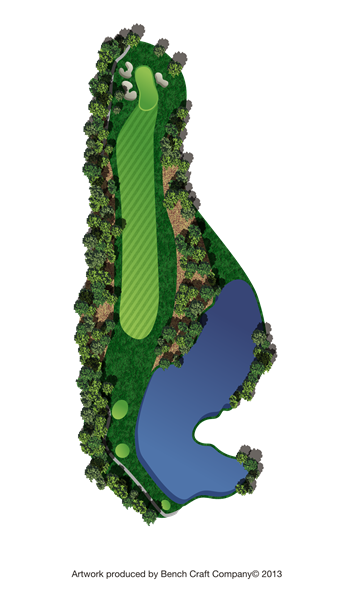 Drive down the center to left center as the fairway slopes slightly to the right. The green is two to three clubs deep so make the adjustment depending on the pin position.

The approach shot is also uphill and the green is deep so add an extra club on the approach. Bunkers guard the narrow green on both left and right. 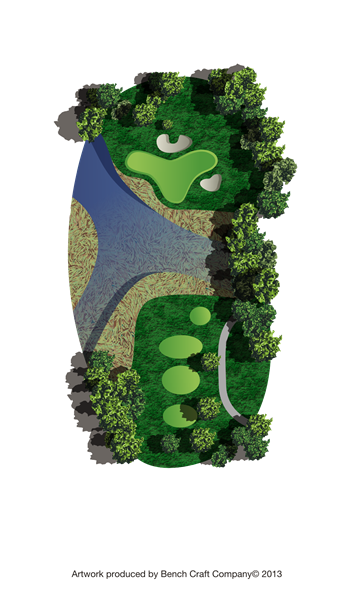 A short but exacting par three hole where the center of the green is the safe play. When the pin position is right or left it is tempting to go for the hole however an errant shot will result in bogey or worse. The correct club selection is critical to have a chance for birdie! A beautiful short par three finishing hole loaded with character!